Stephen Graham reviews a recent performance by Ed Bennett’s Decibel ensemble at London’s King’s Place, a “refreshing, bold and frequently thrilling” blend of ideas taken from a whole variety of other musical styles 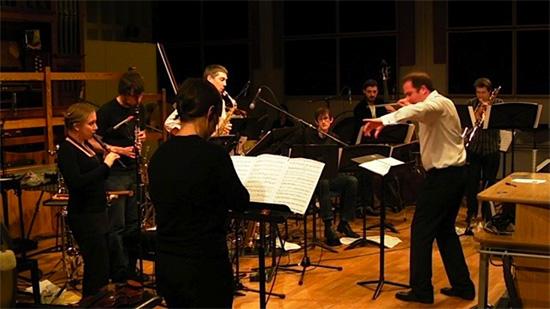 Ed Bennett’s ensemble Decibel works across various contemporary music fields, from the post-minimal amplified music popular in the Netherlands and New York, to the noisy and skronky improvisation that skulks loudly in hidden corners across the world, to the shards of various experimental electronic/spectral/notated musics currently itinerant between concert hall and laptop. This mixture maps very well – naturally – onto Bennett’s own fertile compositional voice, which blends the coiled concentration of the best post-minimalism with the ferocity and dynamic range of thrash metal and the variety of a composer like Heiner Goebbels. So Decibel can be seen as natural descendants of groups like Bang On A Can, whilst operating in and contributing to the formation of as-yet unsettled new musical contexts.

The programme for Decibel’s recent London concert for the wonderful Out Hear series at King’s Place demonstrates the group’s importance as an engine and facilitator for this kind of roving, exploratory music, featuring as it does eight varied works written especially for them, including two world premieres.

The stylistic range of that music reflects the full variety discussed above. So there’s the mounting and eventually rip-roaring excitement of Bennett’s opening ‘Sometimes Everything Falls Apart’, which is paced like a well-oiled 800 metre runner, quickening and intensifying from a slow burn repetitive start to a thumping and strident finish. The postmodern folk theatre of Michael Wolters’ ‘German Folk Songs’ – complete with a Bavarian Tracht-wearing maiden conducting the ensemble with the dips of her bum – feels absurd (and a little too self-conscious and obvious in its satire). Then there are the vividly-wrought thrusts of ‘Extended Play’ from Joe Cutler, and the calculated and wonderful dullness of Laurence Crane’s ‘Stride & Glide’, which makes much play with simple but dislocating divisions of the beat into 1/3 and 3/5.

Right in Decibel’s wheelhouse is Seàn Clancy’s ‘I See Now Why People Hide’, which, like all of his current and recent work, is built around the concept of intervention (as opposed to, for example, appropriation or invention) – in this case on Martin Creed’s text ‘If You’re Lonely’. The piece is effervescent, built from chirruping four beat phrases of conjunct and repetitive quavers, gradually evolving, and separated by subtly-varied interjections of silence and creeping sound. It is reminiscent of the kind of thoughtful sunniness of a composer like Andrew Hamilton, albeit with hints of something queer and strange below the surface, again as with Hamilton. The performance, led by the ensemble’s committed and spirited conductor Daniele Rosina, is typically punchy and bright, although if anything Rosina could have brought out with even more force the strangeness of the score’s repetitions, and in particular could have suggested more about their unusual relationship to the accompanying enigmatic silent/soft commentary.

Where the banal litany of Crane’s ‘Stride’ suggests the Japanese concept of wu – with responsive listeners being lulled into a kind of conducted meditation on non-doing and repetition – Howard Skempton’s tiny and ironically named ‘Rising to a Crescendo’ alternately suggests wabi, where a kind of haunted beauty is found in modest and fragmented forms. Like a lot of Skempton’s work, ‘Rising’ generates its material from the meditative consideration of a couple of tiny fragments of sound, which it turns over thoughtfully before ending without occasion, trusting that the micro-peregrinations of the score are occasion enough – as they certainly are here. The emotional concentration and dark (a)tonal hues of ‘Rising’ in fact provide a very nice contrast with the rest of the programme, which sometimes feels a little bit skewed towards the kinds of dancing, vividly-coloured repetitions heard in one shape or another in most of the other pieces.

Violinist Barbara Lüneburg, founder of Ensembles Intégrales, performs beautifully in the Skempton, but her real showcase arrives with Bennett’s second piece of the night, for solo violin and ensemble, ‘Heavy Western’. As with the concert opener, this piece exudes a real sense of mastery of the dramatic unfolding of its materials, which include a stunningly intense cadenza-like opening for violin that contrasts rising and falling notes against a held pedal with flurries of passagework (these sounded as if they could almost have been transcribed from a particularly intense Kirk Hammett solo), slow burn ensemble intensification, into much more pensive, holy minimalist, even Ernst Reijseger-recalling violin work in the closing sections.

Though Bennett certainly has notes he likes to hit in his works (pun etc.) – chiefly centred around carefully managed escalations featuring repeating material building in texture until heavy percussion tattoos and increasingly freewheeling squawks from brass bring the crescendo to a frenetic climax – the invariably hits his targets with maximum precision and to great effect. This is certainly the case here, with ‘Heavy Western’ perhaps being the standout piece and performance of the night.

Damien Harron, Decibel’s percussionist, wrote the closer ‘So Macho’ in response to a description given to Decibel in Gramophone magazine as performing ‘cock rock’. It splits into syllables and distributes through the ensemble the shouted title phrase, and stitches tropes of the aforementioned genre into its DNA, including, towards the close, a truncated phrase of the famous synth riff from Van Halen’s ‘Jump’. I worried, from the description, that the piece might fall into easy satire, but in actual fact it provides the concert with an exciting and entertaining conclusion, since it garlands its critical inspiration with much fresh material and flavour of its own.

So, despite my odd reservation about the programme or the performances, then, tonight’s is a refreshing, bold, and frequently thrilling concert. This event, and others like it, are indicative of a contemporary music scene that might be running ahead of genre categorisation, but is able to exist within a natural cultural space, where the music can draw from various other musics in an open and pluralist manner. So I don’t know quite what to call or where to place the stuff that Decibel play, but I know it’s alive to the world around it in a way that’s still depressingly refreshing in 2013.